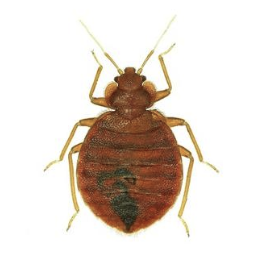 Bed bugs are parasites that are commonly found in sleeping areas of homes and hotels. They feed off of humans at night and during the day they live near the sleeping locations of their hosts.

An adult bed bug has a flat round body about the size of an apple seed.  It ranges in color from brown to red, depending on when it last fed. Right after feeding, the bug is a bright red color which gradually fades to brown as it digests the human blood.  Bed bugs are born lighter in color and turn brown as they mature.

First, the technician treats your mattress, box spring, and bed frame as well as the rest of the bed bug’s primary harborage areas such as the headboard, nightstands, dressers, armoires, and upholstered furniture.

Second, the technician treats all major cracks and crevices including the areas where carpeting meets the baseboards or wall surfaces, cracks around doorframes.

Call us today to set-up and receive a discount off your first pest control service.  Our technician will be happy to come out and discuss an appropriate treatment to eliminate your current pest issue.